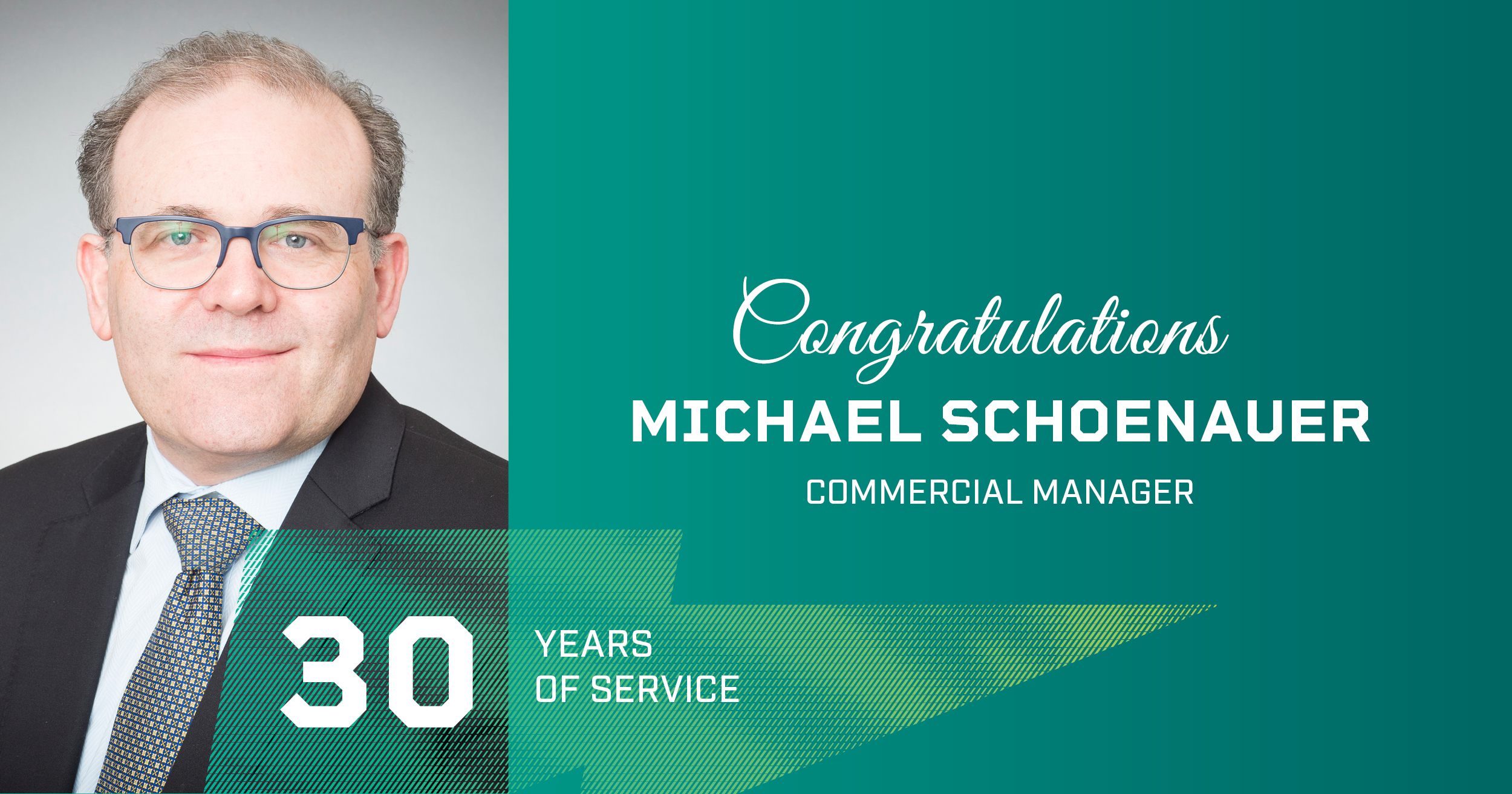 Each year, Clough celebrates the outstanding contributions of its long-serving team members. We would like to congratulate Michael Schoenauer on an exceptional 30 Years with Clough. This is Michael’s journey…

"So far I’ve been at Clough for 30 years.  Unlike a lot of people who have been at Clough ‘forever’ I didn’t join straight out of university, but rather joined in 1992 after a few years in the industry which included a year ‘working’ my way through Europe.

When I joined, Harold Clough was still working in the company as were many of the engineers and superintendents who did the first major project with Harold working as part of the civil projects with the Narrows Bridge. It was still very much a family company then but there still was a wealth of knowledge and a huge range of projects in the company’s archives to draw on. Doing something new was the norm.

The company was starting down the road of their Australian Stock Exchange listing, which was concluded in 1998, so being here before listing had its benefits. I didn’t see much of the Perth office for my first 7 years with Clough. I worked around Australia over the years from Pannawonica (1992), Karratha (1992), Kewdale yard and site (1994), outback Queensland (1995), Kwinana Cogen (1995), to overseas working in Colombo (Sri Lanka 1993) and Sulawesi Indonesia (1996-98).

I still look back on those remote projects with great fondness, but this is how my journey started…

When I got back from my travels in Europe, Australia was still in the grips of a big recession, the one Paul Keating famously remarked; “The accounts do show that Australia is in a recession. The most important thing about that is, is that this is the recession that Australia had to have."

The official interest rates peaked at 17.5% in 1990 and were slowly coming down to a lower, more normal 10.5% when I joined. Not that interest rates had any effect on me as I neither owed or owned much back then.

Work was in short supply and I did some short term agency work while I applied for permanent positions. No email back then, so I had received a lot of letters saying “sorry, nothing at the moment but we will keep your details on file.” Then one Tuesday morning about 3 months after I had received my Clough regret letter, I received a call out of the blue from Gerry Hoffman asking if I was available for an interview in the afternoon.

A quick haircut and half-hour interview with Gerry and Peter Knight, I was told I hired as the Project Engineer and to report to the office in the morning to review the project drawings, being told I would go to Panawonica the following day…Pana where?!

After a quick map search, I found the place and spent my next 3 months living out the back of the pub. I wasn’t allowed to live in the camp with everyone else.

Looking back, working in remote areas and interacting with different cultures has been a key highlight. Most memorable is time spent in Sri Lanka and Sulawesi, Indonesia. Then getting involved in project negotiation, I negotiated the Gorgon Chevron contract commercials twice (in 2004 and again in 2009) and then was involved in Snowy 2.0 final negotiations.

The wide variety of projects and positions has meant constant learning, and applying prior knowledge is an aspect that has made me stay with Clough for all this time. Although I am a Civil Engineer, I’ve often been confused for an accountant or a lawyer.  My last 20 years of work has been done in joint venture, and it is really interesting to understand both business culture and social culture of our joint venture partners – American, Japanese, Korean, Canadian, French, and Italian. We can get complacent and think everyone sees the world in a similar way to us, but joint ventures quickly challenge that false paradigm, repeatedly.

Over my time, things have changed and that has made it interesting for me. Watching drawings go into being computer models, the increase of female representation in the industry (I had two female engineers in my university cohort), the focus on safety and our development of our RAP and diversity and inclusion programs have been great to see become a focal point of our business, as well as Clough’s social awareness and the positive contributions we make in the communities we work and live."
Date
Aug 05, 2022

Choose another country or region to see content specific to your location.